I got a bit of a surprise on Christmas morning when my wife told me, "I've got tickets for you and Dean to go to a concert in Newcastle." - Dean is my brother-in-law. 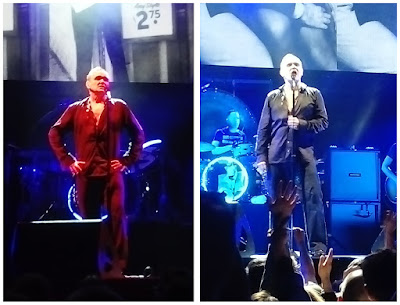 All of my life I've listened to punk, thrash metal and goth. But I have got a Smiths album somewhere, and once had a girlfriend who had a poster of Morrissey on her bedroom ceiling. Does that count?

I met up with Dean a few days later. "Here, was this your idea? Morrissey?"

He gave me the same confused look. "Morrissey? I think I've got a Smiths album somewhere."

It soon became clear that the present was more the night out than the actual gig, but I wanted to get the most out of it so I started out on a diet of nothing but Morrissey for the next few weeks. Every time I got in the car - Morrissey. Every time I walked the dog - Morrissey. Lunchtimes - YouTube. I started singing the songs in my sleep. I even got his new album. By time the gig came round, I was well primed.

A few drinks in Newcastle meant we missed the support act - unless the archve footage of Ramones, James Brown, New York Dolls and a few others was it. Our tickets were for the Standing section, so we got a good view of the show - until we heard the opening chords to Suedehead and everyone went crazy and Dean spilled his beer all over my head.

The one thing that really hit me was how good his voice was. The sound in general was superb. I'm used to seeing bands that play so loud, all you can hear is distortion. But his voice... just incredible.

So there you go. I now listen to thrash metal, punk and goth... and Morrissey. Good night out. Good Christmas prezzie.