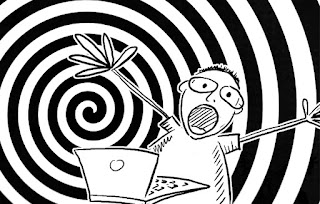 The Author Twilight Zone - that's something they don't tell you about in those writing manuals. It's a special little place where time stands still and frustration grows like an itch you can't possibly scratch.

For anyone who has followed this blog, in particular the development of Buttercup, you might have the idea that things in publishing run slowly. Actually, in the case of Buttercup, it's racing along at top belt. Bearing in mind that this time last year, I hadn't even started on the first draft. Often it takes more than a year to just place a manuscript, never mind all the edits and other stuff.

One of the hardest things is keeping the major details under wraps. I've blogged about the process: the pitch, meeting an agent, working on edits, sketches and illustrations - because I think that's interesting to anyone who wants to write and go through this process. But I've avoided giving any official details of the book, the publisher, release date and other things. The reason is simple enough: the publisher has made the investment, the book is their product, so it's only right that they get to make the announcement first.

But the further along the process you get, the tougher it is to keep all this news to yourself. I've seen the cover go from roughs to final artwork, I've seen the promotional flyers - I've got a date for release, another date for the promotional launch... I've even seen the ISBN number (nerd central, right there!). I am so close to the finish line that I can almost taste it.

But I can't say a word. Not for another week and a bit.

That's the Author Twilight Zone. And it's itching like mad.