I've just spent the last half hour in the bath with Stephen King. I don't mean I was in there reading his latest book - he was actually there in the bath with me! And it happens too many times to be just the wacky coincidence he claims.

Most people think Stephen King lives in Maine, USA. Wrong. He actually lives in a council house in Penshaw, just a few streets down from me. In most cases, that should be enough for us never to even see each other, but here he was, once again, trying to sound all casual as he smiled and said, 'I was just passing.' Then he sticks his head in through the door, sniffs and his eyes light up. 'Are you running a bath?' He holds up a loofah and a soap-on-a-rope and adds, 'Care to share?'

A voice in my head is crying out to tell him to get lost. He can't keep coming round here like this. But he's been my icon since I was a kid, so I sigh a reluctant, 'Come on in, Stephen.'

Let me make things nice and clear - bathtime with your hero is not the fantasy you might think. For a start, he's like six foot four or something, which doesn't leave a lot of room for me, but because he's so mega-famous he insists he gets the good end, which means I have to sit hunched up with the taps in my back.

This time, it was too much, so I told him straight. 'You know something, Steve-O?' (he hates it when you call him that). 'If I make it big in 2014, I'm going to build an extension, get a bath fitted and a totally separate combi-boiler, and charge you the cost of the bloody gas!'

He just sneered and said, 'Like that's gonna happen.'

And this is what gets me. The only reason he comes around here is because he thinks we've got something in common. 'Come on, Col. You're a writer, I'm a writer. Why run two baths?'  But as soon as he's all relaxed and happy he tries to belittle me. Every single time.

Well, how can you edit when you've got a 5 month pup on your keyboard demanding a walk? 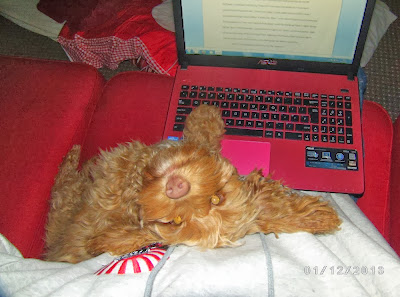