In gearing up for the launch of The Mayfly, I'm giving away Clash and The Boy Who Buried Dead Things for free.

The first chance is this weekend. Starting on Friday, 20th May until Saturday 21st both books are FREE on Amazon. Share and enjoy.

Here are the links:

The Boy Who Buried Dead Things

This book won the Costa award, which makes sense: I felt like I needed coffee to get me through it!

Having said that, there is a lot that I enjoyed about The Lie Tree. Without giving spoilers, the plot has a wonderful touch of misdirection. I love it when magician hides their secrets in plain sight. Some of the imagery is incredible with beautifully written figurative prose. So I enjoyed the writing too - just not the story.

The plot drags itself into life as Faith, the daughter of a "natural scientist" does little more than observe the actions of adults - after all, she's just a girl in a world where only men have sufficient brain capacity to understand science so there's not a great deal for her to do other than sneak a look at this, listen and feel sorry for herself.

She takes a more active role in the second half and pulls off some really cool scenes. The boat, the cave... and I especially liked the bag of rats. But it just wasn’t enough. She had no presence, no voice, and I found myself constantly checking how much longer I had in each chapter.

As for the ending... With such strong, gothic undertones I was hoping for something more, something dark and as haunting and original as the idea of the tree itself. I felt a bit let down. There's nothing bad here, just nothing that made me really love it. 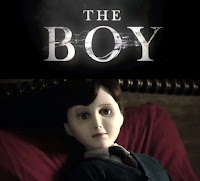 When I first saw the trailer for The Boy, I thought it was a joke. It looked like a sketch by Mitchell and Webb or Harry Hill. The doll looks far too over the top, like it's trying much too hard to be creepy.

The film kicks off with Greta (Lauren Cohan) taking a job as a nanny in a big, scary house with a couple that are clearly too old to need a nanny. And so we meet Brahms, the doll that has replaced their dead child. And right there, I got why so many critics hated it. The tentatively dark atmosphere, the overly frightened parents hiding a terrible secret and a scary oil painting stuck on a wall of endless wood panelling and a possessed toy - all the ingredients of a classic, old-school horror to such a silly degree that the movie is smothered in cliché. Hence the reason it comes across as a parody, a joke.

But those things are only clichés because we watched so many movies using the same tools - because we liked them. We might look back on them now with a shake of the head, roll of the eyes and a shared smile, but there's a certain amount of endearing, slightly embarrassed nostalgia - a bit like remembering hideous fashions, or music you took so seriously.

Getting past all of that, the movie drew me in. In fact, it got to a point where I thought it had a new take, that it was playing on the psychological aspect of Greta, like the old couple, having to deal with the loss a child, and the boy really was just a doll; the ghosts were in her own head and this was really going somewhere...

...and then it all went tits up and resorted to type. It went from seventies' creepy to eighties' Wes Craven land. And I still enjoyed it (a bit), because I loved those movies too, but for a while there, I honestly thought it was going to take the old school style and show us something new.

I had this recommended a few months back and let it slip. Then I noticed it in a book shop and picked it up to see what the big deal was. I read the back waiting, just waiting for the term I dread most... "detective."

Don't get me wrong, I like crime fiction now and then, but it often feels that any decent thriller must have a gritty detective running about from clue to clue.

I kept reading... No detective. No investigator or renegade cop.

I bought the book.

The Ice Twins is the story of a couple trying to deal with the grief of losing one of their twin daughters. A year after the accident, they move to a secluded island in Scotland - little more than a rock in the sea with a lighthouse. The place is a mess, always cold, battered by bad weather and overrun with rats. But what really makes life difficult is the sudden realisation, and then confusion of which twin actually died. And is the surviving twin simply damaged by trauma, or is she really talking to her dead sister?

For any YA readers looking at this, The Ice Twins does contain adult content, but I can certainly see this seductive, haunting thriller appealing to readers of older, stronger YA, It's dark, atmospheric, often claustrophobic and definitely creepy. A fantastic psychological thriller. Highly recommended.
at 21:06:00 No comments: