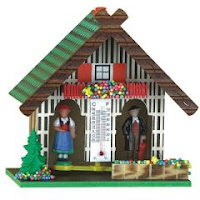 Have you ever seen those model houses with an old woman and an old man that come forward to tell the weather? The old woman means it's sunny and nice; the old man means it's stormy and cold.

Today was my first day back at work after the break. I work in a primary school and I like it. Usually, I'd say I love it (especially Fridays - on Fridays I work in Reception and Nursery. I could write a load of posts on that alone).

Today I was talking to a colleague about Christmas. She initially said she'd had a great Christmas, then added how it was, in fact, pretty bad. Grandparents and falls and broken hips and hospital. That sort of thing. So not really a great Christmas at all. I made a joke that people are inclined to say they've had a good Christmas because that's what people expect to hear, but actually, if you've had a shit holiday, it's good to have it acknowledged from those who understand, because Christmas is a pretty tough time for some.

This year is our second Christmas without Matthew, but things started getting heavy for me around October. I've dealt pretty well with things up until now. I mentioned this and said that I sometimes feel like one of those old models with the old woman and old man. When I'm at school I play a role of the old woman - all sunny and bright. I have fun and genuinely mean all the jokes that get me through the day. But inside, a storm is brewing.

When I get home, I can put the old woman back in the house. The old man steps forward and the bad weather comes with him. And that's not a bad thing, because in all honesty, sometimes it's nice to be the old man. It's nice to allow that side out.

Grief is hard. It comes in waves of different sizes, waves where the dips and peaks can last for months or days, or hours or minutes. Happy times come with their counterparts. What the hell do you call that? Bipolar grief?

One day, I'd like to write a story about this. Not a memoir, but a story, based on all of this. No holds barred, no emotion caged and I'll call it Notes On Grief.

But not yet. Not for a long time. For now, I'm content that I can be the old man in the comfort and safety of my own home, because that means tomorrow, I can be the old woman, and the sun will shine again.

The Girl With All The Gifts

Finally saw the movie. I read the book a couple of months ago and loved it. I first heard about it when it was shortlisted for the 2015 August Derleth award (alongside Station Eleven and that year's winner, the completely brilliant No One Gets Out Alive by Adam Nevill). It took me a long time to get round to it but it was worth the wait.

I read a few early reviews that were quite severe, stating it was an original idea that fell into cliché territory once the main characters left the compound. I can understand the frustration because neither the original cover nor the blurb gave any indication that this was a zombie story. And as zombies are the the modern day luvvies of the horror world, this particular area is getting a tad tedious (but thank god the romantic vampires finally slipped away).

There was a lot I loved about the book. More than anything, the detailed look at zombies at the physiological level. This approach, for me, means The Girl With All the Gifts does for zombies what the Necroscope series did for vampires.

The movie, by comparison was pretty good. It kept very close to the book with two unusual changes - the skin colour of girl and her teacher. For some reason they swap. It doesn't really impact, and anyway, Sennia Nanua is amazing as Melanie. I didn't recognise Glen Close till halfway through, which was round about the time I realised Sergeant Parks was Steve from The World's End. I did like the change in the way the movie dealt with the spores near the end, having them growing up the post office tower rather than filling the streets.

All in all, great book and pretty good movie.

Why you should write really bad scenes

Most writing guides focus on writing good scenes, getting the conflict and tension in there. A bit of detail to add colour and location, good dialogue. I'm going to put forward the argument for bad scenes - the stuff that gets cut.

The problem with focusing on good scenes and top copy is the moment you write a dull scene, you have a good idea that it should be cut, so you cut. And you start again, which leads to frustration and the feeling that you're getting nowhere. I certainly feel that way. And then I read an article by a YA author who said she had to write nearly half a million words to get one particular novel right. If an average YA novel is 70,000 words then that's 430,000 words not needed.

Does that mean they could be avoided?

Well, it got me thinking to how I wrote Clash and Arabesque. Clash actually started as a very different book, something called Get Even, Get Girl, Get Lost, and the story of Kyle and Alex was really just the opening of the book. It wasn't until I came to rewriting the entire novel that I realised Alex was really interesting and the rest of the book paled compared to those first few scenes. Two thirds were cut right there. About 40,000 words, and nothing of that was reused or reworked. It wasn't particularly bad, just nowhere near as strong.

So I began rewriting to develop those first scenes further. The majority of that first chunk was either rewritten or ditched. I think only two scenes of the original draft survived, and both were developed further and rewritten several times over. It was months before I had enough scenes to take a step back and be able to work on the plot.

I couldn't have planned Clash, and I couldn't have written it straight off. It was a mish-mash of good and bad scenes that were eventually hammered into shape.

Yesterday I wrote a scene for my current project (I'm going to call it Daniel's Daughter from now on, just as a working title so I can refer back to it), As a scene, it's okay. It was fun to write. It's got conflict and tension, it fires off questions for the reader and ends on a cliffhanger. But now that it's written I can't help thinking, 'What if...?' and approach the opening a different way. Over the past year or so, this has stumped me again and again and made me rethink, replan and start over. It's that fear of taking a wrong path that has held me back. It's that fear of writing bad scenes - or at least, unnecessary scenes - that holds back development of new ideas. The result of this is a book with lots of good scenes, but not a lot of development - no depth. I've written some clangers over the past few years!

So maybe writing those bad scenes has its place. I know that yesterday's scene probably won't make the final cut, and today's scene might not either. But I do think that writing them is the springboard to the good stuff.

So for now, the scenes stay, and Daniel's Daughter moves a step forward.