My Secret Dog by Tom Alexandar

I love this book. Love it. It's short, simple and funny. Kid wants a dog - kid finds a dog and keeps it secret.

I work with reluctant readers, so something accessible, entertaining and short enough to get through in a couple of sessions is a great find, but I also liked it for what it is - just a great little story.

The illustrations are deceptively simple, just stick figures and line work, but they work. What's more, it gives another great message to kids because they are easy enough to copy, showing that you don't need to be a brilliant artist to tell a fantastic story.

Quite odd that at the start of the year I decided to quit writing, and at the end I find myself in a stronger position than ever - certainly a situation I never would have imagined back in March.

There was a good deal of personal difficulty at the start of the year. My brother-in-law and friend for almost twenty years had been diagnosed with a brain tumour in August of 2016. He went through treatment and seemed to be doing very well, but as we moved into 2017 it was clear things weren't going well. At the same time, we were approaching March, which would mark the second anniversary of Matthew's death. On that particular day, and that particular time, I know where I should be, but that was also the date of a consultation for my brother-in-law. We thought it was just going to be a question of getting his pain under control, but ended up driving through to a palliative care hospice in Sunderland where he died a couple of weeks later. What shocked everyone was how fast the cancer destroyed him. Horrible.

With March being such an emotionally difficult time, the rejection of a book I'd invested the last of my YA skills in tipped the balance. I wasn't up to writing another YA book, so I decided to put that YA novel out on KDP as Here in the Poison Garden and draw a line under it.

I needed a big change. As I work in a primary school, I thought I try the lower Middle Grade audience (approx age: 7-10) - something quirky and silly with a horror slant. My agent wasn't confident in pitching books for this audience, and I had no intention of writing any more YA books, so I left the agency and decided to just write for fun. No more agents. No more publishers. No more stress.

But once you have a finished book, it's hard just to leave it. So, during the half term break, I had a moment of madness and sent this MG book directly to three publishers. A few days later, one requested the full script and offered to publish. On the back of that I contacted my dream agency. I went down to London, met Agent F, I pitched to do my own illustrations and Buttercup became a two-book deal.

At the end of the year, I'm in a situation where I have a top agent who really knows the younger market and I have a load of Middle Grade ideas bouncing around in my head. The first Buttercup book is going to proof in the new year and the second book is already written.

The illustrations for Buttercup #2 don't really count as a goal because they're something I have to do - and I can't wait to get started. Goals are something I want to achieve that I don't have to do. Something to work towards. So here are a few. 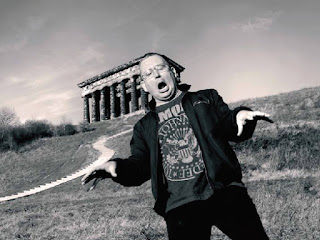 Quick Buttercup update. Two weeks back, I met Steve from Maverick. Before he became a publisher, he used to have his own photography business, so he wanted to do some promo shots.

We spent a stunning, but cold, Sunday morning flying around North East landmarks including The Angel of the North, some strange statues in South Shields, Stadium of Light and Penshaw Monument.

The best shots are going to be used for press releases early next year, but this one makes me smile. When we went to the Angel, it was early so there weren't many people about. The same in South Shields. There were a few learner drivers in the car park of the Stadium of Light, but by the time we took this one, at Penshaw, there were people walking past giving us some strange looks while I staggered down the slope, zombie style.

All part of the fun of being an author-superstar.

On the illustration side, things are going well. The drawings are taking much longer than I thought. I draw directly onto a computer, so I knock out a first sketch, then zoom in and do a more detailed drawing, then zoom right in and draw the final outlines. It means each image takes about an hour but it has the advantage that when it comes to editing them, I can change things quite easily.

The book is written, I've done the pitch, made a sale and got a top agent to negotiate the contact. Now it's time for the real fun to begin. It's editing time!

Working with an editor is very much like being back at school. You've done your best piece of work ever - and it must be good if you've got an agent and a publisher, right? Right, but that doesn't mean it's perfect. It's the editor's job to take a good script and make it even better. 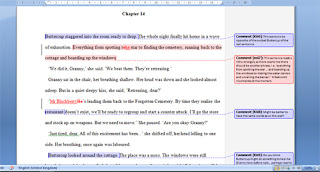 Here's a screen shot of a page somewhere near the end of Buttercup. There are two colours of comment box because I've got two editors working on this.

No one writes a perfect script. Even Stephen King says that every writer needs and editor. That's simply because it's often impossible to see your own mistakes. Not just typos but continuity errors - someone out of breath in one scene, fine in the next. Wearing a yellow scarf on one page, a purple hat in the next. Also, because you have the full story in your head, if you haven't managed to get all the details across to the reader, some parts might not make sense. An editor will see those things, and a lot more. They also come up with suggestions to improve or strengthen the story, they spot areas where the story dips or moves too quickly.

For a writer, there's something genuinely exciting about receiving a manuscript filled with edits and comments. Someone has read your work enough to really, really think about it. You also have to weigh up suggestions - if you really don't feel a suggestion works, argue the point. This isn't someone pulling your work to pieces for the fun of it - you're all in the same boat, trying to build the best sail that will take you to Land of Commercial Success. Or at least, trying to make the book the best it possibly can be.

I love hearing how other writers get things moving. While sitting here, reading a post on Facebook, I could look out and see my wheelie bin standing in the street. It's bin day so there's a few lined up next to the road. The windows are wide open and the translucent roller-blind with the butterflies, that is usually there as a thin, white barrier is up, because I've been washing our fabric sofas and the whole place stinks of washing up powder. The result is a perfect view of my wheelie bin. And although I know what is in there is really an old brown towel all wrinkled up from being stuffed in the top, from here it looks just like three fat human fingers poking out the top. Can't shake he need to go and double check.
at 09:37:00 No comments: 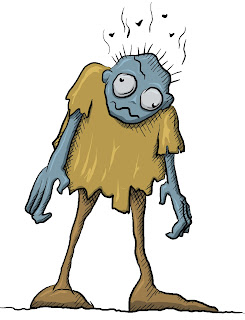