Back in 1979, Ridley Scott shocked the world with Alien, a film that burst science fiction out of its shell and splattered horror all over the sci-fi genre. The movie remains a classic, and although the sequels were box office successes, they never managed to capture the disturbing atmosphere of brooding horror that Ridley Scott gave us. And so, with Prometheus promising to be a prequel, and directed by Ridley Scott himself, it poses the question if he work the magic himself.

Short answer: yes he can. 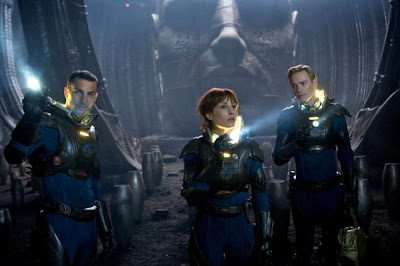 I'm not going to give an outline of the story because I went into the cinema knowing this was a prequel to Alien and nothing more. It started slowly, with breathtaking scenery and shots that give a fantastic sense of scale. Unlike the splatterfest action sequels to Alien, Prometheus offers a gradual, cumulative and atmospheric horror on a sci-fi canvas. There are moments that are genuinely creepy and scary rather than holding out for shocks and jumps (although there are a couple of these, delivered very well).

The casting isn't fantastic, and I totally disagree with other reviewers who say that Michael Fassbenger, who plays an android, steals the show. I thought he was overly robotic - especially when you compare him to the creepier, much more lifelike android, Ash, played by Ian Holm in the original Alien. And while I understand that the point of Ash being humanlike was the shock revelation, Fassbenger was so OTT that he might as well have a flashing light, arms held out straight while he repeats, "I AM A RO-BOT"

Noomi Repace, however, plays a belter as Dr Elizabeth Shaw. I'm dying to give examples and talk about scenes but daren't. Just go see it. Wooden android aside, Prometheus was otherwise brilliant. A fantastic prelude, but it also stands on it's own merit as a damn fine sci-fi thriller.