Why it’s okay not to want a publishing deal.

I first decided to make writing a career when I realised that my son’s disability meant he would always need someone at home. It didn’t seem fair that my wife would never be able to return to nursing, so in 2003 we swapped roles. I became Matthew’s full time carer, wrote when he was at school and began submitting book after book.
It took five years and six novels to get “The Call” and when it came, I was ecstatic. This was it, the beginning of a new chapter! We’d be able to make a better life, buy a decent car, maybe even move out of our council house.
Things didn’t work out quite like that. The world of traditional publishing wasn’t quite what I expected.

The publisher offered a promotional package that included a London book launch, a professionally produced YouTube trailer, press releases, newspaper reviews and an ebook version – this was the early days of Kindle, the ideal time to break into the ebook market.

The ebook never came out. I had to create the YouTube trailer, organise my own book launch, sort out school and library visits and contact local press.

The money was dire, but I had a foot on the ladder. Book 2 did rather well. It sold international rights and was shortlisted for a major YA competition, and book 3 was due for release in 2015. My career was going great, right?

Wrong. There was no more money, the publisher cut all ties and my agent retired.

A new agent represented my next four books but none of them sold. This was getting frustrating, but in real terms, it was the least of my worries.

In 2015, when Matthew was sixteen, his disability got the better of him. Grief took over our lives and the world stopped. 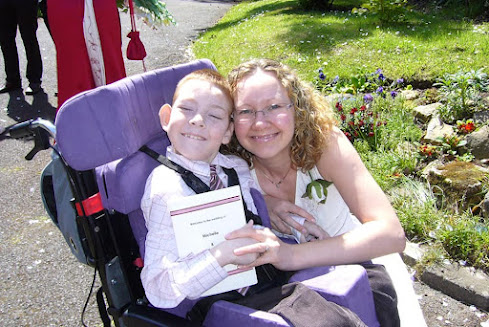 Matthew with his mum. Image: Colin Mulhern
After a long break, I set out to write something completely new, something Matthew would have liked. This was a four-book series for young readers. I landed a deal but once again, despite all kinds of promises from the publisher, there was very little promotion and when the first book bombed, the entire series was cancelled.

I was devastated. I had failed in making a better life for Matthew when he was alive, and now I’d failed in doing something in his memory. The traditional world of publishing had led to frustration, misery and depression.

But it wasn’t the end of my writing career. There was another option...

I decided to experiment with self publishing. The process was quick and simple and very enjoyable. It also meant I could write whatever I liked and didn’t have to worry about agents being unable to sell it or publishers pulling the plug. This was true literary freedom.

There might be no advance, but that doesn’t mean you can’t make good money, even a full-time living from being a self published author.
L.J. Ross was rejected by traditional publishers. She turned to self publishing and has sold over 7 million books. Other self published giants include Mark Dawson, Michael Anderle, Craig Martel, Chris Fox, Marie Force and Stephanie Hudson – a seven-figure author who made $300,000 in a single month (check out this episode of the SELF PUBLISHING SHOW).

A good place to start would be Joanna Penn’s podcast at The Creative Penn or Mark Dawson's at The Self Publishing Formula. Also, Chris Fox's video series.
post updated: 18/04/22)
at 18:55:00